Finally, we had signed on the land sale. We’d signed mortgage papers. We were committed and there was no turning back! It was time to start pulling in the harness. And side by side, we tackled the wild piece of land we purchased.

Clearing and Preparing the Land

Even though the previous owner had cleared an area for building, there were more than a few trees that needed to be removed!

Tall pines blocked the airway for power access. Just behind the house site, there was a small grove of very large poplars. I wanted to leave these old trees, but the risk was too great. One windstorm was all it would take to smash out little house to toothpicks! They had to go before we began building. 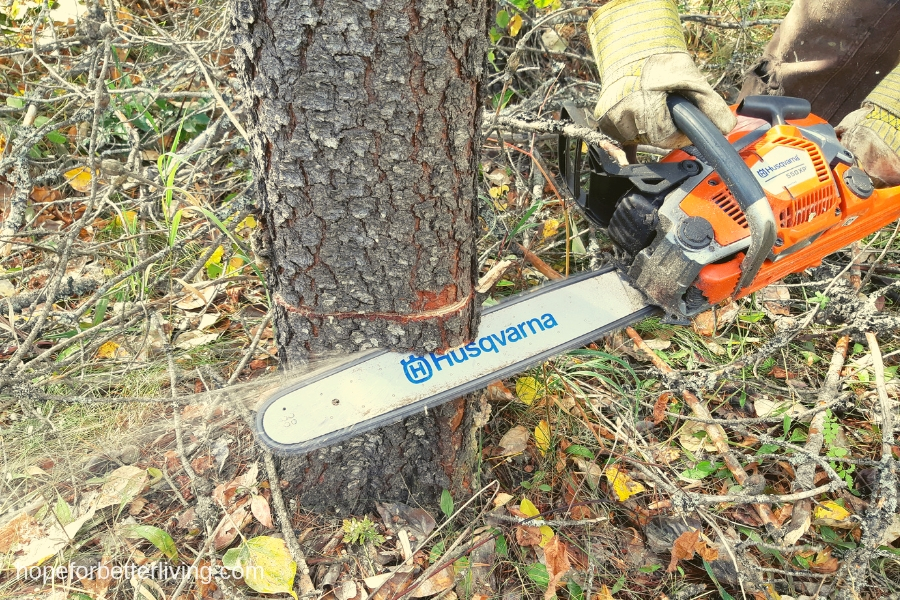 My man had requested time off work, but it was still 4 weeks out. And so, we tackled our land on the weekends. Without heavy duty equipment, clearing was a demanding task. We fell the pines with our Husky chainsaw. Limbs were hauled out by hand and heaped in giant piles for burning. Logs were cut into short lengths, lifted on our shoulders and stacked about the property. 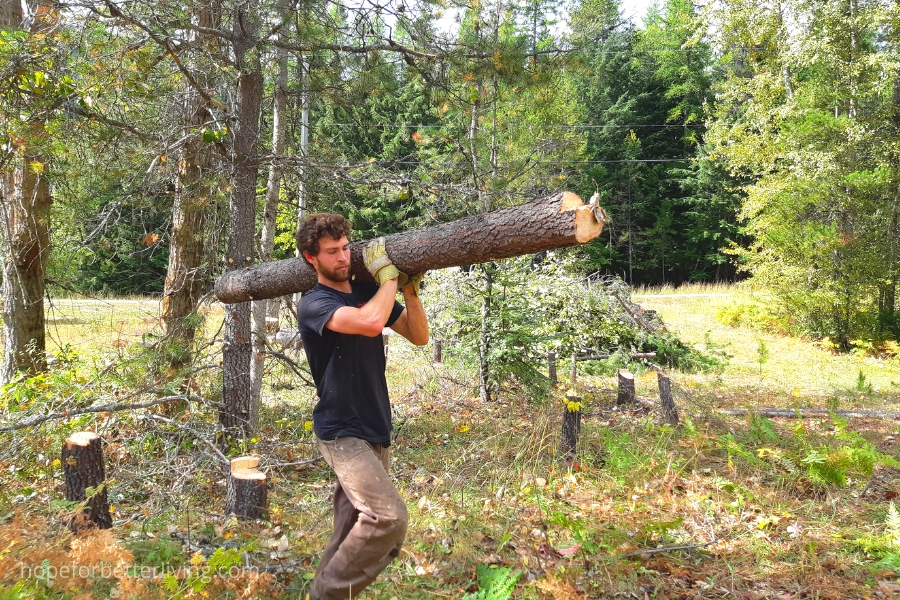 Lucky for us, my parents just happened to be passing through at this time. My experienced logger father agreed to clear the large poplars for us. One by one, they came crashing down, leaving a big, empty hole between us and our northern neighbor. Because these tree trunks were so large, we had to let them lie until we did rent equipment.

Finally, my man’s time off work began! Weekends had been long and hard. But now, every day was long and hard. While I desperately wanted to help, I simply couldn’t keep up to my man’s pace. Instead, I did what I could, when I could.

At this point, we were still renting the big, rambling house in town. This was soon to change! We didn’t want to waste money paying both rent and a mortgage. It simply didn’t make sense! After talking it over, we decided to move up the property before the house was built.

Once it was on the grid, we would spend the winter in our 8×12 power shed. It was small, yet large enough for two people. A little electric heater would warm the place nicely, and the frost-free water hydrant was just outside the door. We’d already put in an outhouse, and could keep a “slop” bucket for nighttime use and for when things got too cold.

We’d pioneer it on our land! Wouldn’t that make a good story for our (one day) children?!

A neighbor let us rent his equipment for grubbing stumps and leveling building sites. As soon as possible, we built the power shed. Not even Laura Ingalls could have lived in something so small! Both my man and I laughed as we looked over it’s tiny frame. Were we crazy? 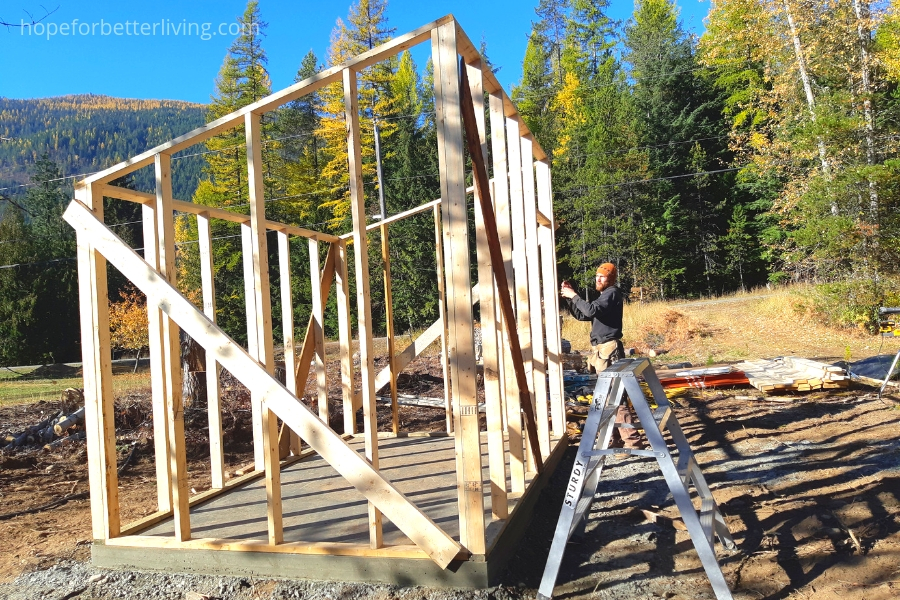 It didn’t take us long to cover the walls with tar paper, to shingle the tiny roof or insulate it’s short and narrow walls. We were just waiting to get power before we moved in. At that point, the nights were too cold to live without heat, and a small wood stove would have cooked us alive!

We waited for the power company to show up. Waited. And waited! They took their sweet time.

Sometimes, we waited patiently. Other times, we were anything but patient! Slowly but surely, things kept coming together.

Winter was quickly approaching. We worked harder than before (actually, I don’t think that’s possible; it just felt like we were working harder!). House footings were dug. Underground electrical work was done by my man and his dad, who made a special, 16 hour trip just to help out!

Concrete forms were borrowed from a generous friend. Both footings and walls were poured with the help of a brother. 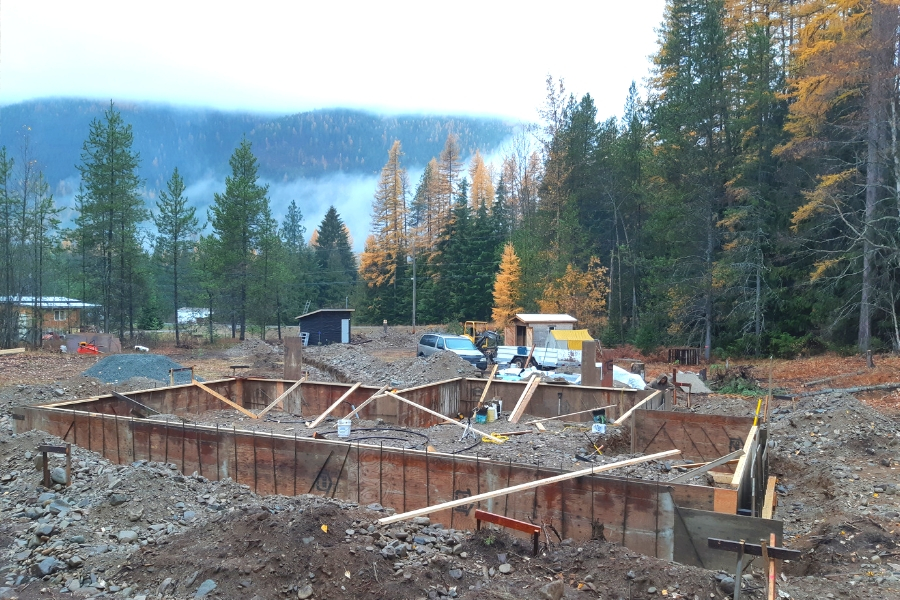 Evening temperatures were steadily dropping, but we still had to level the center of the house, pack it with gravel, insulate, tie in rebar and run our in-floor heating lines before we could pour the concrete slab!

The race was on!

These days were long and we stuck to it with a dogged determination. The first heavy frost came. And then a few skiffs of snow. My man kept one ear in tune to the weather forecast. If we were going to pour the slab that winter, we needed a 3 day spell of warmth.

The details of that season were nothing but a blur for me. I remember friends and family coming to help. I remember exhaustively late nights. I remember feeling like I couldn’t carry on, but knew I had to.

Just when we began thinking we wouldn’t make it, a 3 day warm spell showed in the forecast. And we took it!

Preparing for the Final Concrete Pour

An order was placed for 2 truckloads of concrete. An accelerator was added to the mix. Extra help was recruited. And we worked harder than ever before!

An A-frame was constructed over the home’s foundation. We draped it with a 40×60 tarp to create a pocket of warmth so we could add heaters to ensure the concrete properly cured after the pour. 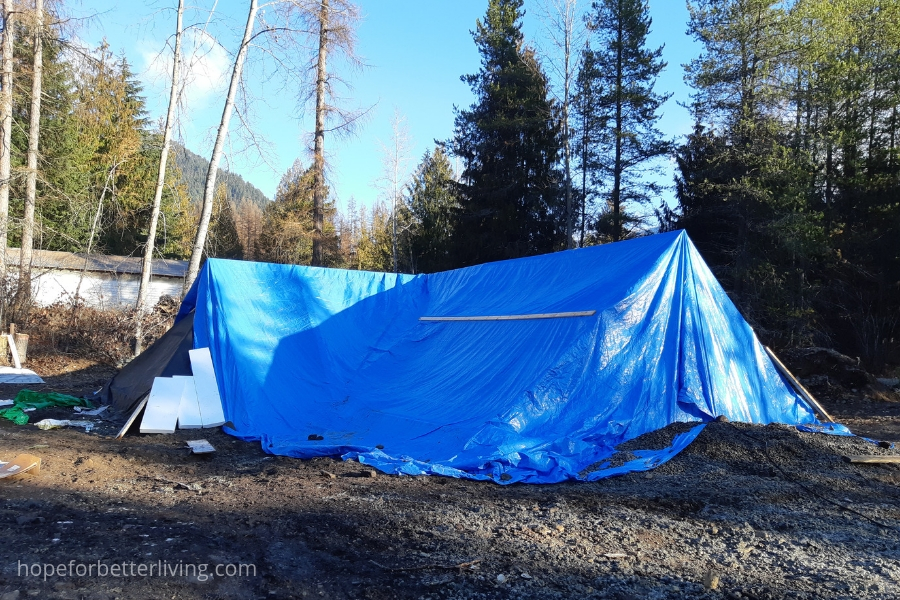 The night before the pour, we worked late.

That was one of those vivid moments! Darkness had descended, but the white, Styrofoam insulation we were working on made things lighter. We only had to fasten in-floor waterlines to the re-bar and it was ready for pouring the next day.

Even with three of us working at it, the job wasn’t going fast enough! Completely exhausted, I remember crawling around in a skiff of snow. My bare, frozen fingers tried to fasten wire ties to the unforgiving, metal rebar. Everything was painfully cold. When cutting a hose to length, my man sliced his finger with a utility knife. An abundance of blood mixed with the white insulation and snow. But we couldn’t stop. 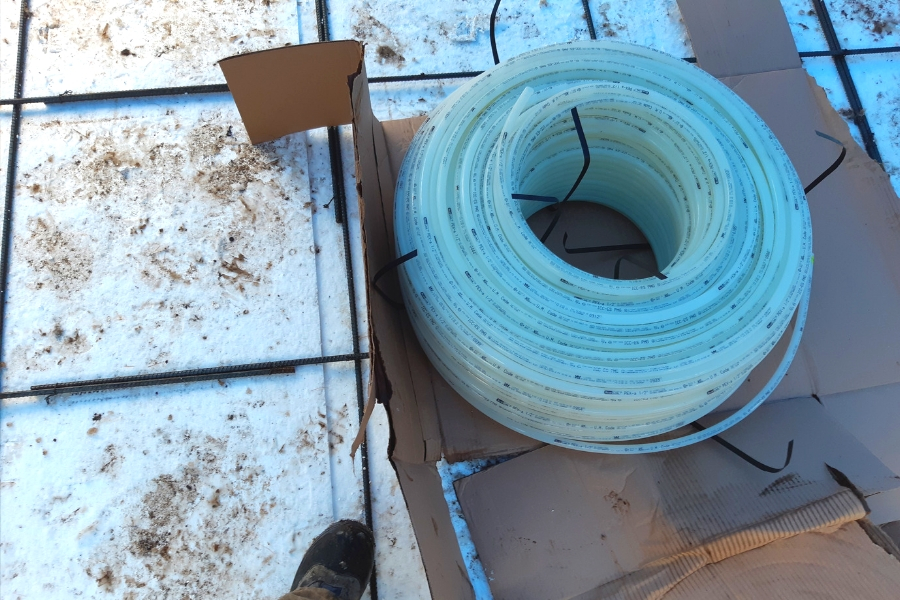 Concrete was coming at 7:30am the next morning. Prep work had to be finished that night. Work, we did! Time seemed to crawl by, and suddenly, it was over.

After wrapping up the job site, we crawled into the van, completely exhausted. It was after 8 pm when we reached home. I opted out of a meal, shower or anything else. Crawling into bed, I curled into a ball, pulled the blankets up and was out like a shattered light bulb.

JOIN ME DAILY ON SOCIAL